‘Mooching’ best describes my activity during the week’s sojourn at the home of Rose and Henry Cong. Despite usually acting like I have a nest of ants in my underwear, I was more than happy to be completely idle, as I wanted to get over the jet lag as fast as possible before training began. The Congs were very accommodating hosts, letting me laze around on their sofa watching telly and patiently helping me work out what I could eat three times a day.

Moogle is the third member of the Cong residence, a shiba puppy who never stopped biting me. From what I understand, this is very much symptomatic of puppyhood, but it was difficult not to take the relentless assault on my hands and ankles personally. Drawing on my sparse knowledge of dogs, I tried pinning her down in order to assert my dominance and thus reduce the nipping. This only fuelled her enthusiasm, as she assumed I was participating in her toothy game, and bit me even more to reciprocate. I explained my attempts at behavioural management to Rose, who gave it a go herself. In almost no time, Rose had established herself as leader of the pack and was being chewed considerably less. Where is the justice?

It might seem odd, but I feel I must comment on this apartment’s lavatory. When in India, we were travelling through the region of Sikkim via jeep (did you know you can fit twelve people in a normal-sized jeep? Because you can), when we stopped for a comfort break. I asked the way to the toilet and was pointed through what appeared to be someone’s house, which it probably was. The facility itself was no more than a wooden closet with two shortened planks in the floor creating an approximately five-foot drop to the ground below. The toilet in Chateau de la Cong, however, washed itself at my approach, and self-flushed and re-cleaned upon my departure. Now that’s service.

In the midst of my laziness, there were some chores to be done. For instance, I needed to print and laminate the flashcards which I had been forced to dispose of in Heathrow. At a place called Kinko’s, a clerk asked if I wanted the staff to print the images, or do the honours myself, to which I responded “Yes.” Thankfully Rose was present to save me from my embarrassingly poor language skills.

Laminating all thirty-seven images took a long time. While we were standing there, systematically feeding the plastic-sandwiched paper through, some conversation unfolded which at the time I found hilarious but am now completely unable to remember. About ten minutes after the comedic moment, I recalled the hysteria and began to laugh. This made me lean forward, and a corner of the flashcard I was holding became caught in the mouth of the laminator. With an arrogant slowness the sheet was ripped from my hands while I impotently tried to tease it back. As an A4 print of the American flag slowly emerged crumpled and undignified, Rose demanded “Why you do this to my country?!” 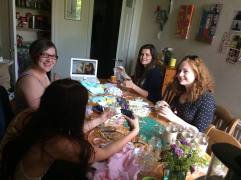 One evening I was Skyped by Anna and Anastasia, and was placed at the end of the dinner table while they worked on bunting for Anna’s wedding. It was lovely and nostalgic to be present at a crafting session. They informed me I was forbidden from marrying a Japanese man and settling permanently in Japan, which was sweet, although they added that given my ‘luck’ in the UK, their concerns were minor. I discovered that Anastasia had tracked my flight, which was incredibly impressive because I had given her almost no details. In light of her deductive prowess, it is my firm belief that she should adopt an eccentric moustache and solve crime for a living.

Finding food devoid of gluten proved to be a daily task. One day we visited an international food store and found a whole shelf dedicated to gluten-free packaged food. I was overjoyed, but sadly could not stock up as I still needed to drag all my belonging across the country and couldn’t afford to weigh myself down further. Finding restaurants also proved tricky. A couple of times we ate at an Indian restaurant, as I had read that Indian curries do not contain gluten (though Japanese curries do). The restaurant itself had a large flat screen TV which continuously played Bollywood music videos, and I could not tear my eyes away from these riveting and vivid spectacles. Every one had the same plot, more or less, of a sexually charged pursuit in which a beautiful, young, unnaturally pale Indian couple flitted gracefully about, barely clothed and dry-humping each other. It seemed like the same actress was in most of them. Either that or the Bollywood perception of feminine beauty is so narrow that all its heroines look identical.

On Saturday Naomi came to Tokyo and for the first time in about six years the three of us hung out together. There was a pub crawl that night organised through an official Facebook group which we caught up with.

The event was pretty popular, creating an acute concentration of foreigners. Among the people I spoke to, there was an English man who was old, short and from Grimsby. I was impressed, however, when he said that he worked in Dubai and was fluent in Arabic. There was also a Japanese guy 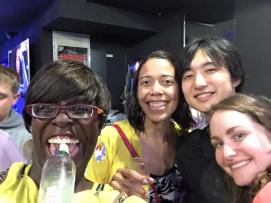 who looked more and more familiar as the conversation went on until it transpired he had studied at Nagoya at the same time we had, and had been dating one of the girls on our course.

In the first pub, a baseball cap reading ‘Cape Cong, Bali’ kept catching my attention, mostly because it was neon green and the wearer was about a head taller than everyone else. As Rose’s married name is Cong, I determined to find out more about this Cape so I could relay the information to her. All I could determine from the guy, who turned out to be from New Zealand, was that a friend of his got married in Bali, and the cap was a memento. A brief Google search weeks later seemed to suggest that Cape Cong is not, in fact, a place, but a person’s name. But I liked the title of this chapter too much to change it.

A Swede and a Canadian spoke to the three of us for a long time. They were both extremely flirtatious, which was reciprocated by Naomi who at one point said “I like Swedish meatballs,” while stoking the Swedish guy’s chest, then turned to the Canadian man and stroked his chest while saying, “I also like Canadian bacon.” This is the best duel come-on I, or indeed possibly anyone, has ever witnessed.

It was about a ten minute walk to the next pub, so I would walk one thousand miles was played as we exited, and I screamed along joyfully, marching with glee. There were so many of us, it was like herding ethnically diverse cattle across the streets of Tokyo, and I genuinely worried about the damage being done to the reputation of foreigners as we swaggered drunken and unsure to our destination. At the final bar we chose not to stay for the impending foam party and made our way to a karaoke bar. I’d forgotten just how much I love karaoke, and sang my little drunken heart out.

An accident- and misfortune-prone English woman attempts to adventure in the Far East. View all posts by theunfoldingfan